Lauren Featherstone is a private pilot with a multi-engine rating, as well as high-altitude, high performance and complex endorsements. She is a technician and office manager at Ava Jet of Texas, LLC, an FAA Part 145 repair station. In addition, she teaches yoga, pilates and fitness at SunstoneFIT in Plano, TX.

Lauren discovered her passion for aviation after graduating from The University of Texas at Dallas in 2015. Teaching at the yoga studio, she was introduced to the first female pilot she had ever met, who went on to inspire Lauren in her pilot career. Since that point, Lauren has attempted to gain as much experience with aircraft and the aviation industry as possible — she visits various airports to work on aircraft, regularly attends NBAA and AEA conventions, and manages several Cessna 421s while she continues saving for further flight training.

Lauren is currently beginning training for her Instrument Rating, and looks forward to achieving her Commercial Pilot License soon after. In the past year, she has become highly involved with the North Texas chapter of Women in Aviation. She served as a lead volunteer for Girls in Aviation Day, organized the latest chapter board election, and educated kids at Dallas ISD’s STEM Expo. Most recently, Lauren joined the WAI NTX board as Girls in Aviation Day Chair.

Lauren is grateful and excited for this opportunity to continue and accelerate her path to become a corporate pilot and ultimately receive her ATP. 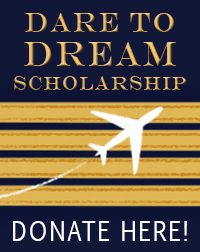